The History of Mdina

Dating back to the Bronze Age, the hill on which L-Imdina (Citta` Notabile) was built was already a fortified area. About 1000 BC, the Phoenicians surrounded the place and parts of what today is Rabat with walls. It was called Malet, meaning refuge, the same name given to the island.

According to tradition, where the Cathedral is built today, a palace was originally built and occupied by the Roman Governor Publius, the one appointed by Saint Paul to be Malta’s first bishop.

In the year 870 A.D, the Saracens attacked the island and the town took its modern name L-Imdina, meaning town surrounded by a wall. For defence purposes, the Arabs separated L-Imdina from Ir-Rabat with a deep ditch, and surrounded the city with new walls. From this time onwards, L-Imdina barely changed. The strucuture and plan of the streets is practically the same as the one of a thousand years ago.

In 1090, Count Roger the Norman conquered the city. The first action he took was to build a new church dedicated to Saint Paul instead of the small church on which Publius palace one stood. Count Roger and his successors also established Malta’s aristocracy, which always played an important role in L-Imdina’s history.

Under the Normans and successive ruling dynasties, Malta and L-Imdina underwent hard times. Malta’s nobility, which gathered inside the walls of Mdina for protection from piratical attacks, had to cater for the needs and administration of Malta. The viceroy of Sicilly had given Malta the right of internal autonomy, which functioned through the Universita’, which met in L-Imdina. As a result of the courage shown by the inhabitants of L-Imdina when they revolted against the injustices of Monroy, the island’s ruler, the King of Spain gave the title of Notabile to the city of L-Imdina.404040

In 1530, Emperor Charles V gave Malta to the Order of St John. The knights who were sent to report on the island and its city declared that the city was old and abandoned. When eventually the Order came to Malta, it promised internal autonomy of Mdina and the civil rights of the Maltese to be safe guarded .

During the Great Siege by the Turks, Mdina, under the command of the Portuguese governor Don Mesquita, contributed to the final victory through its contacts with Sicity and guerilla attacks on detachments from the Turkisharmy.

After the Great Siege, the construction of Valletta in 1566 lessened Mdina’s importance. L-Imdina became the OldCity, Grand Master Lascaris planned to demolish the city’s walls, but when soldiers came to execute his orders, women from L-Imdina attacked the soldiers with brooms and ropes and the Grand Master left Mdina as walled as it was.

A strong earthquake which shook Malta in 1693 destroyed many buildings, including the cathedral. Gran Master Vilhena took the opportunity and began a project of new edifices in L-Imdina. Plans were laid for the new cathedral by the Maltese architect Lorenzo Gafa, together with the magisterial palace, during that time the seat of the Universita’. This began to hold its sittings in the Palazzo Giuratale. The local nobility also began to build new palaces in L-Imdina, in this way giving this city its modern layout as seen today.

During the French period, the people of L-Imdina were the first to rebel against the French, they killed general Masson, and the revolt spread though the whole Malta and Gozo.

The British who succeeded the French abolished the Univerista’ forever. L-Imdina, more than ever, became the last refuge of the Maltese aristocracy, helping in this way to preserve the aristocratic and medieval character. L-Imdina is now known as the ‘Silent City’. 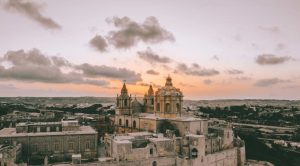